Vaping and Acute Lung Injury: Are All E-Cigarettes to Blame?

An evolving case raises questions about what we really know about vaping.

As of November 7, 2019, 2,051 people have been diagnosed with severe lung disease secondary to smoking electronic cigarettes (also known as “vaping”) and 39 people have died from the newly recognized e-cigarette-related respiratory illness. The lung condition has been given a name by the CDC: EVALI, or e-cigarette or vaping product use-associated lung injury.

This outbreak of acute lung injuries is clearly linked to vaping and has stimulated calls for banning e-cigarettes completely. Since 2016, the FDA has banned the sale of e-cigarettes to minors, but use of vaping products by teenagers has nevertheless soared.

A few states have recently stopped the sale of flavored e-cigarettes because they are believed to be one of the reasons adolescents are attracted to smoking them. But despite evidence that adolescents are attracted to the flavors in e-cigarettes, there is no evidence yet that eliminating them would reduce teenage vaping, making it unclear if that step will have any benefit. Some believe that e-cigarettes should be completely outlawed, and in June, San Francisco became the first U.S. city to ban e-cigarettes entirely. Meanwhile, the CDC has advised that “while this investigation is ongoing, CDC recommends that you consider refraining from using e-cigarette, or vaping, products.”

What Is Causing Vaping-Related Lung Injury?

We decided to look into exactly what is and isn’t known about lung disease caused by vaping at this point. Does it warrant calls for increased e-cigarette regulation? Will such regulations have unintended adverse consequences, such as pushing people who use them to quit smoking combustible cigarettes back to their Marlboros?

One thing is clear: Almost all the cases of vaping-related lung injury have occurred so far in people who have smoked e-cigarettes that contain THC, the major component of marijuana. Only 17% of the cases involve people who say they have exclusively smoked nicotine-containing e-cigarettes, and because THC is illegal in some states and people may be reluctant to admit they smoke it, even fewer of the cases may involve nicotine-only e-cigarettes.

Also, many of the cases of lung injury seem to have occurred in people who bought e-cigarettes that were either homemade or had ingredients added after purchase, leading the CDC to advise users not buy them “from informal sources” (e.g. friends, family members) or “off the street” and not to “modify or add any substances to these products that are not intended by the manufacturer.” Police officers across the country now report seizing thousands of illicit vaping products and devices.

At this point, it is unclear what ingredient (or ingredients) in e-cigarettes is actually causing the lung injuries, and there is some controversy about exactly what kind of physiological damage is found in the lungs of autopsied samples. However, on November 8 the CDC announced vitamin E acetate as the “likely culprit." Vitamin E acetate has been used to “cut” THC containing vape products purchased on the black market. Three of the 29 samples tested by the CDC, however, came from people who said they had never vaped THC.

Thus, while there appears to be little doubt that the outbreak of lung injuries is caused by vaping, it could be that only vaping THC is the problem, or that vaping e-cigarettes made by major manufacturers like Juul, bought in reliable stores and not subsequently modified, does not cause lung disease. At this point, public health authorities cannot tell us exactly what aspect of vaping is causing the problem, although CDC believes its recent identification of vitamin E acetate as a possible cause is a “breakthrough.” Some feel that CDC has not been sufficiently clear on this point. “…the CDC has failed to properly communicate the severe risks of vaping marijuana,” blogged Michael Siegal, a professor in the Department of Community Health Science at Boston University School of Public Health. “Instead, the CDC has successfully scared the public into thinking that e-cigarettes like JUUL could almost instantly kill you." 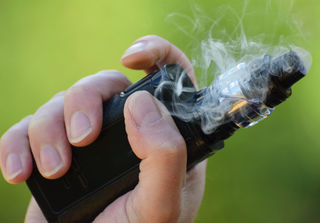 Always Ask: What Is the Denominator?

More than 40 million people vape worldwide, making the number of acute lung injuries reported so far a very small proportion of total exposures to e-cigarettes. It is of course possible that many cases have not been reported and that vaping causes more subtle forms of lung disease not yet recognized, but it also seems that right now only a very small minority of people who smoke e-cigarettes develop the dramatic form of lung injury associated with death.

Interestingly, experts in the U.K. do not seem nearly as concerned about vaping as in the US. A 2018 statement by Public Health England emphasized that vaping nicotine is far safer than smoking combustible cigarettes. This is because although nicotine is an addictive substance, it is not known to cause cancer.

Strikingly, Public Health England also appears much less concerned about youth vaping than we are in the U.S. Their report states that: “The evidence does not support the concern that e-cigarettes are a route into smoking among young people (youth smoking rates in the U.K. continue to decline, regular use is rare and is almost entirely confined to those who have smoked).” We have previously written about the concerns and evidence about whether vaping is a gateway to combustible cigarette smoking. It is clearly something we are much more worried about in the U.S. than in the U.K.

We are also concerned about addiction to nicotine: even if vaping nicotine has no immediate respiratory system health risks, creating a population of people who cannot stop vaping is undesirable. But at present, the extent to which people get addicted to vaping nicotine appears unclear. More research is needed to establish whether vaping nicotine produces the same craving and potential for withdrawal symptoms as does smoking it in combustible cigarettes or absorbing it through mucous membranes, as with chewing tobacco.

Given the current state of knowledge, it would seem that advocating a complete and permanent ban of e-cigarettes is not based on available science. It is entirely possible—perhaps likely—that acute lung injury from vaping is caused by bootlegged products and additives and/or by THC and not by nicotine-only e-cigarettes produced by mainstream manufacturers and sold in reputable stores. When a salmonella outbreak occurs among people who have eaten lettuce, we applaud the CDC for quickly tracking down the source of the contamination and ordering it off the market; we do not ban lettuce forever. In this case, we are very happy that state and federal epidemiologists are working hard to figure out what specific aspect of e-cigarettes is causing the lung problems.

This should not be taken to mean that we are encouraging people to vape, especially if they are underage or not doing so as a means of quitting combustible cigarettes. We do think, however, that it is always important for everyone to understand the state of the science attached to any issue. Hopefully we will find out soon what is causing vaping-related acute lung injury and no more lives will be lost. But right now we can perhaps say only a few things with certainty about vaping nicotine:

3.     We do not want people who vape to suffer from acute or chronic lung disease, and we don’t have long-term studies reassuring us that years of e-cigarette exposure is safe for the human respiratory system.

It is often seen as unsatisfying to conclude that the only thing we can do when faced with a problem is to conduct more studies. It is what scientists say all the time, of course. People who vape want to know if it is safe to continue doing so. But exaggerating risks is not the way to convince people to change their behavior. As high school senior Eliza P. Shapiro put it on CNN recently while discussing vaping: “Teenagers respond to real data and good science."

Certainly, vaping nicotine is safer than smoking it in Marlboros, so no one is advising people who vape to quit combustible cigarettes to stop vaping. We really don’t have an answer for everyone else, unfortunately. Right now, the CDC advice to shun homemade e-cigarettes and e-cigarettes containing THC seems reasonable. It might also be a good idea to enforce laws prohibiting the sale of e-cigarettes to minors even more vigorously. FDA now has a Comprehensive Plan for Tobacco and Nicotine Regulation, which hopefully will include measures for a rational approach to e-cigarette regulation.

Beyond that, we mourn the loss of those who have died as a result of vaping and hope our scientists get definitive answers soon enough to keep that number where it is.

Despite the Pandemic, There Is Something We Cannot Ignore